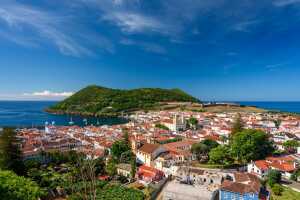 Jorge H. Dinis, 64, of Peabody, passed away Saturday evening at the Beth Israel Medical Center in Boston following a lengthy illness. He was the beloved husband of Maria G. (Rodrigues) Dinis, with whom he shared 44 years of marriage.

Jorge was born on January 15, 1958, in Serreta, Terceira, son of the late Diamantino and Irene (Borges) Diniz. He was raised and educated there before making his home in the United States.

He had worked as a maintenance technician at Boston University for over 35 years, until having to take a leave due to his recent illness.

Though he left his beloved Terceira and built a life for his family in the U.S., he took pride in keeping his heritage and culture alive and passing those traditions and values onto his children and extended family members. He was very active and instrumental in the Imperio das Crianças for over 25 years and the Grupo Carnaval do Faialense, both in Cambridge. He was also a member of the Faialense Sports Club and a faithful parishioner of St. Anthony’s Church in Cambridge.

His zest for life was palpable. He had a great sense of humor, joking around with family and friends, always embracing the laughter around him. He also enjoyed gardening, storytelling, visiting his beloved Terceira, but most importantly he cherished his family. A devoted husband, father, grandfather, brother, and uncle, his love for his family never wavered. His presence, love, and humor will be greatly missed by all who knew and loved him.

Besides his loving wife Maria, he is survived by his children, Steven Dinis and his wife Paola of Peabody, Maria Dinis-Imonti and her husband Mark of Tewksbury; his grandchildren, Henry Imonti, Mateo Dinis, Brandon Imonti; his siblings, Maria Leonor Fagundes of CA, Diamantino Diniz and his wife Deborah of Swansea, Nelia Gomes and her husband Manuel of Fall River, Elsa Rebello of Fall River; his sister-in-law, Eva Soares and her husband Antonio of Marblehead, their children Jason Soares of Everett and Jessica Soares of Beverly, whom he always loved and cared for as if they were his own, along with many nieces, nephews and friends.  He was predeceased by his brother-in-law, Benildo Fagundes, of CA.

Visitation will be held on Wednesday, September 14, from 4PM-8PM at the Ruggiero Family Memorial Home, 10 Chestnut St., Peabody. His funeral mass will be held on Thursday, September 15, at 11AM in St. John the Baptist Church, 17 Chestnut St., Peabody. EVERYONE IS KINDLY ASKED TO GO DIRECTLY TO CHURCH THURSDAY MORNING. He will be laid to rest in St. Mary’s Cemetery in Salem. Memorial contributions may be made in his memory to Imperio das Crianças, c/o Sonia Santos Soares, 53 Corey St. Unit 2N, Everett, MA 02149.

To send flowers to the family or plant a tree in memory of Jorge H. Dinis, please visit our floral store.

A Memorial Tree was planted for Jorge

Join in honoring their life - plant a memorial tree